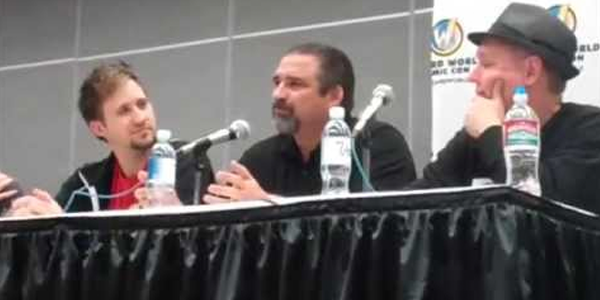 My day on a creativity panel at Comic-Con

When I was a young, avid reader of comic books, we didn’t have any comic conventions. And even if they did, I would never have been able to go to one. But if there was, and if I had, I’m sure my brain would have collapsed into itself due to the artificial gravity caused by my spinning head. The glee would have been uncontainable.

Now, as a man in his mid-40s who still has fond memories of my geekdom, I was asked to join a panel to speak on the topic of creativity at Wizard World, a Comic-Con convention here in Las Vegas. I was able to see what everyone is talking about and was pleased to find that all the art and wonder I appreciated as a child was still alive and well on the minds and in the hearts of so many people.

The panel was billed as: “The Creative Engine. There is often nothing more challenging than the development of the creative process. Is art birthed from the spontaneous, or is it a result of a carefully crafted rhythm and structure? In this panel, Genese Davis (The Holder’s Dominion, MMORPG.com), Alex Raffi (Creative Courage, Imagine Communications), Eric Kieron Davis (Senior Producer, Creative Director) and Deryl Skelton (Artist) will describe how to overcome creative obstacles and share their keys to unleashing creativity.”

This was right up my alley. The discussion was fun with a room full of young comic book artists and writers, established and otherwise. Genese and Eric discussed their inspiration and Deryl shared some great stories that illustrated his process as a comic book artist. My perspective was admittedly less romantic, but hopefully practical in its examples and advice on ways to expand your creative limitations. I did have one person who had asked a question during the Q&A portion say to me that he appreciated my answer to his question and that I had also unwittingly answered six other of his questions in the explanation. I’d say that alone made the experience worth it.

Later that day, I spent a lot of time roaming around and observing people of every creed, race, color and age, spellbound by the result of human creativity – all sharing a moment, unapologetically delving into fantasy. I thought of myself being inspired early on by the fantasies I experienced and imagined after reading comics or seeing movies and knew that many young minds had made a choice that day – consciously or not – to take the leap into becoming a creative. I’d say that alone made the experience worth it.