An offense that comes from misinterpretation is vulnerable 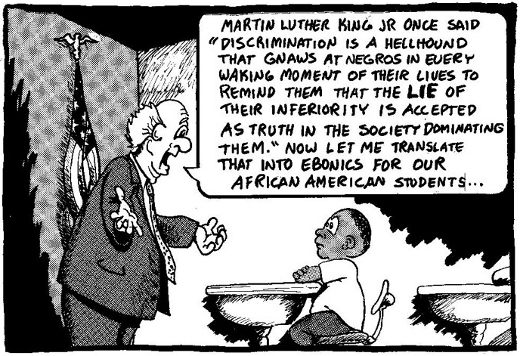 Although I created this cartoon with good intentions, I was wrong in how I illustrated my point. Editorial cartooning is meant to criticize a particular person or viewpoint. I unintentionally targeted the very people I was naively thinking I was defending.

In 1997 I was creating editorial cartoons for the University of Nevada Las Vegas newspaper “The Rebel Yell”. Not long after the above cartoon was published complaints from offended readers began to reach the offices of the Rebel Yell. The cartoon was inspired by a controversial decision by the school board of Oakland to recognize Ebonics as a primary language. It had kick-started a debate so naturally, I felt a need to respond. My cartoon had clearly hit a raw nerve with this irony-steeped piece. Multiple allegations of racism provoked the newspaper’s staff to publicly back me, whilst I drew another cartoon and offered explanations to as many people as possible by letter and phone. My attempts to explain my intent fell on deaf ears. I realize now that I was misguided and that my attempt was amateurish and poorly expressed. But it was this letter from Pulitzer Prize-winning cartoonist Berkeley Breathed in response to a request for guidance that provided the advice I needed. I learned a big lesson about communication that day. Being allowed to have your work published is a privilege that shouldn’t be taken lightly. I still consider his advice to this day. Below is his response to my letter asking him for advice. 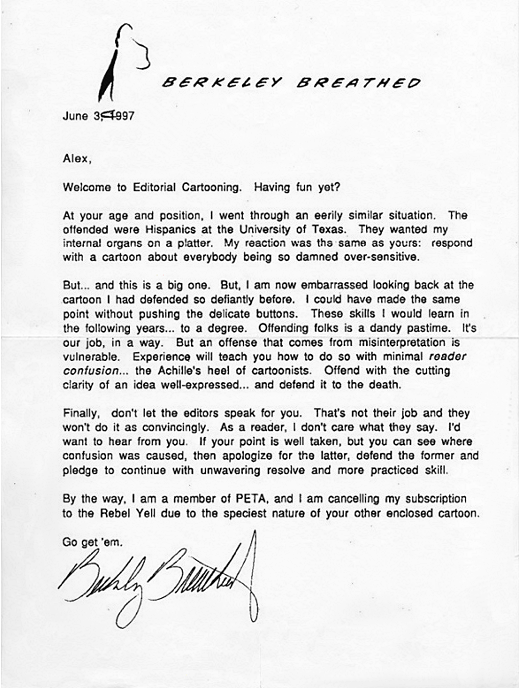 Welcome to Editorial Cartooning. Having fun yet?

At your age and position, I went through an eerily similar situation. The offended were Hispanics at the University of Texas. They wanted my internal organs on a platter. My reaction was the same as yours: respond with a cartoon about everybody being so damned over-sensitive.

But… and this is a big one. But, I am now embarrassed looking back at the cartoon I had defended so defiantly before. I could have made the same point without pushing the delicate buttons. These skills I would learn in the following years… to a degree. Offending folks is a dandy pastime. It’s our job, in a way. But an offense that comes from misinterpretation is vulnerable. Experience will teach you how to do so with minimal reader confusion… the Achille’s heel of cartoonists. Offend with the cutting clarity of an idea well-expressed… and defend it to the death.

Finally, don’t let the editors speak for you. That’s not their job and they won’t do it as convincingly. As a reader, I don’t care what they say. I’d want to hear from you. If your point is well taken, but you can see where confusion was caused, then apologize for the latter, defend the former and pledge to continue with unwavering resolve and more practiced skill.

By the way, I am a member of PETA, and I am cancelling my subscription to the Rebel Yell due to the speciest nature of your other enclosed cartoon.